Are They a Codependent or a Narcissist?

Are They a Codependent or a Narcissist? 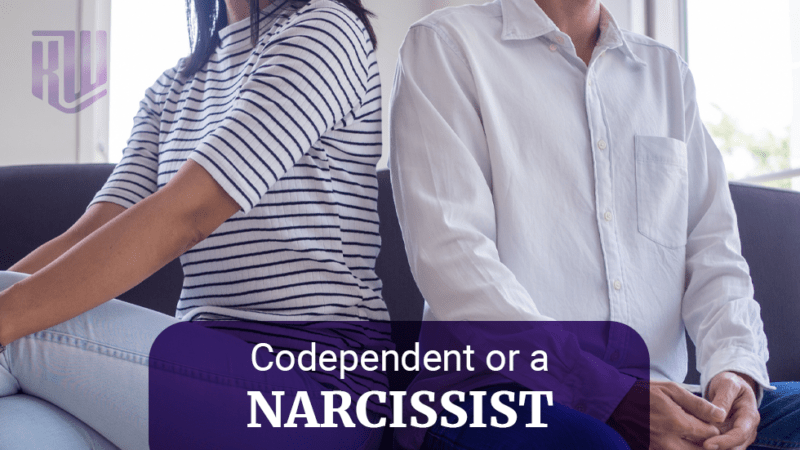 Did you know that many people confuse a subtype of codependency with Narcissist?

Why do people get codependency and narcissism mixed up? Well, the simple answer is the internet.

When you view informative content on any platform, you’re only getting a snapshot of the whole truth. No one would be receptive to content spanning ten or twelve hours – our attention spans aren’t that long! We prefer content that is short and to the point. It’s impossible to cover all of the subtleties and intricacies of a dynamic in such a short amount of time or a passing post on social media.

People watch several videos or view content and become self-professed experts on the content, not realizing that there is so much to it that they have missed. They then pass this incomplete information along, leading to a lack of clarity and misunderstanding of the distinctions. It actually requires a lot of invested time and effort to become an expert in something.

So, even this content that I will share will not give you a complete picture of the differences between codependency and narcissism. Still, it will provide you with a basic understanding that you can explore and, if you like, delve deeper.

What is a narcissist?

According to the DSM, for someone to be considered a narcissist, they must have at least five of the following nine characteristics:

This subtype of codependence is often mistaken for narcissism. In some ways, they look exactly the same, but not in all ways, and the critical part is the stability of these traits across situations.

Most people teach codependence as one overarching concept, leaving people with the impression that codependent people are whiny, spineless, and weak. That’s the disempowered side of the dynamic. The other side is linked to some of the most successful people on the planet. This is not to say that some successful and powerful people are not narcissistic, but what we celebrate as a successful person in our society is often actually a falsely empowered codependent.

This subtype of codependent is arrogant, grandiose, invulnerable, anti-dependent, a perfectionist, walled-off, and controlling. This is the CEO, lawyer, banker, finance type, social media star, and actor. These people rely on grandiosity, admiration, entitlement and demand the attention of others to succeed in their career, social status, or achievements. Can you see how this could be mistaken for narcissism?

Falsely empowered codependents minimize and deny their own feelings, seeing them as weaknesses; they lack empathy for others’ emotions. This is because they are so invested in achieving what is called ‘outside pursuits’ such as their career, they can only focus on themselves and their achievement. They need approval and validation just like a narcissist and persistently label, judge, and criticize others. They might use sex, money, intellect, and charm or gifts to manipulate, control, and have power over others. Or they might be indifferent, authoritative, or enraged as a means to control people.

This type of codependent will try to control and shape others’ thoughts, feelings, and actions. They will avoid emotional, physical, intellectual, and sexual intimacy to keep control and distance. Illness, addiction, and outside hobbies or interests will be used to avoid reality. This subtype believes they have everything together and don’t have any issues; any perceived problems are because of other people. These codependents are also created by their childhood trauma. Unfortunately, they will likely say that their childhood and parents were perfect; there were no problems growing up.

However, despite how similar this is to narcissism, some differences set them apart.

The difference between narcissism and falsely empowered codependence

Although falsely empowered codependents will rarely admit their mistake, they are aware they have made a mistake. They will rarely cooperate, negotiate, or discuss a problem, but they are usually aware that they can avoid the problem. On the other hand, the narcissist thinks that they are faultless and that you are the crazy one for seeing any kind of fault with them.

Similarly, the codependent will feel superior to others to hide their shame while the narcissist lacks that awareness. The codependent might be aware that they need help but will never ask for it, and they will be resistant to professional help.

So, the three main distinctions between the narcissist and the falsely empowered codependent are awareness, addiction, and consistency.

The falsely empowered codependent may not admit their dysfunction, but they are aware of it, while the narcissist is entirely oblivious. You may as well be speaking a different language. The codependent almost always has an addiction, while the narcissist sometimes does. And all of the personality traits discussed above that show up in narcissism are consistent across time and situations. One narcissistic moment at one point does not mean a person is a narcissist.

Take Phoenix, Arizona, and Denver, Colorado as comparisons. Phoenix is a desert – it’s always hot, the skies are usually blue, clouds rarely form, or rain falls; it’s unchanging like a narcissist with only occasional dips. On the other hand, Denver has multiple seasons with long winters that seem almost endless, but they do end. This is an example of consistency differences. You can think of the narcissists as Phoenix and the falsely empowered codependent as Denver. One’s behavior is constant, while the other has seasons.

So, when people watch a fifteen-minute video and become an ‘expert,’ they’re missing out on the inconsistencies of narcissistic traits found in the codependent. Instead, they mistake falsely empowered codependence as narcissism.

This is why it is so important to seek professional help when dealing with these dynamics. Then, when you start to discover the subtleties truly, you’ll realize the difference between the two, which could be the key to saving your relationships.

If you are not ready to do that, you can go to my website, www.thegreatnessuniversity.com. Under the videos tab, you will find the codependent and narcissism playlists. In addition, there are several informative videos and articles which will help you to start on your learning journey.

In my opinion, it is critical to understand codependence because it is so prevalent in daily life and relationships. People underestimate how vital codependence recovery is to navigate anything.

Gaining the knowledge, skills, and tools to overcome codependence might save a relationship.

To learn more, you can watch the video here: